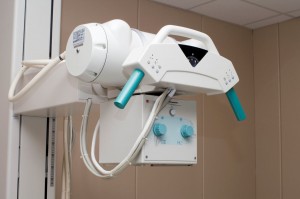 Radiofrequency Ablation(RFA)  is a tool used primarily for liver cancer and liver metastases. Percutaneous radiofrequency coagulation is performed by using an electrode placed in the lesion, coupled with a radiofrequency generator that produces local tissue destruction by converting radiofrequency into heat. After the liver, most reports are of lung, breast and kidney cancers. There are is very little literature to guide its use for recurrent chest wall tumors. A large case series by Dupuy included 19 cancers in the chest wall skeleton. It concluded that this technique can safely palliate pain but did not provide information on overall survival and recurrence rates. RFA has been reported to cause nerve damage and nonehaling wounds. There is also the expense of this procedure and the radiation exposure to operators and patients. It would be prudent to obtain more experimental information before routinely using this procedure for recurrent chest wall tumors.